SANReN is hosting its third Cyber Security Challenge during the CHPC National Meeting 2019 at the Birchwood Hotel and OR Tambo Conference Centre in Kempton Park from the 01 to 04 December 2019.

The Challenge is currently in full swing and competition between teams is rife. The current ranking at 21h08 on 02 December 2019, has Team ‘We Who Shall Not Be Named’ in the lead. 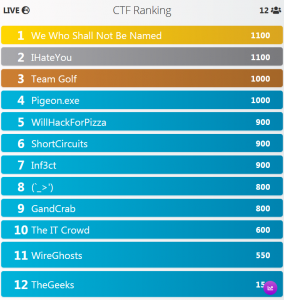 At CSC 2019, 12 teams comprising 44 students (some teams are only comprised of three members) are battling it out. This year a team from Mozambique qualified to participate in the competition.

Which one of these teams will be crowned the winner?

Much appreciation goes to our Cyber Security Challenge 2019 Sponsors